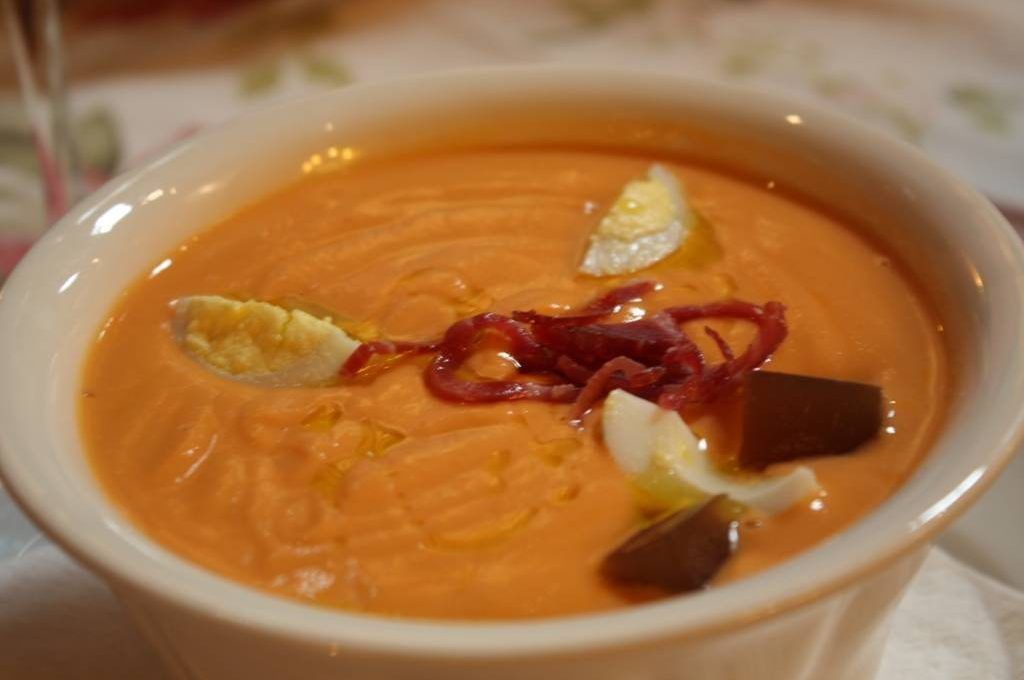 Last month (December, 2018) I went to Spain to spend the holiday season with my family. My close relatives live in a town in Málaga called Alhaurín el Grande so we stayed there. We were only 2 hours away from Córdoba, so we decided to hop in the cars and explore the city for a few days. While in Córdoba, we tried to eat as many local dishes as we could, meaning we ate a lot of the city’s star dish: SALMOREJO.

So…what is salmorejo? A brief history.

Salmorejo is a typical dish of the whole Andalusian region, but more particularly from Córdoba. It is a cold, thick soup that has its humble origins in the Andalusian countryside. It was a very convenient meal because farmers could prepare it right on the spot, crushing readily available vegetables with old bread in a mortar.

The ingredients are pretty simple, but their quality will significantly improve the taste. Let’s talk about some of them.

Tomatoes: the best variety to use is roma or plum tomatoes. If you are in Spain they are called ‘de pera’, which stands for ‘pear’, a reference to their shape. This tomato variety will give the salmorejo a nice consistency due to its “meaty” pulp. It also adds intense flavour and a nice red colour. If you can’t find them, make sure you use a variety with thin skin, like the typical tomatoes on the vine that you find in the supermarket or even cherry tomatoes. No matter what type you end up using, make sure that your tomatoes are ripe.

Bread: the ingredient that Cordobans (I just made up this name) think makes a difference with the rest of the salmorejos around the world. The local bread in Córdoba is called telera. The crust is very crunchy and the inside, the white part, which in Spanish is called miga, is very soft and dense. For those of us who don’t have access to this bread, any white variety of baguette will do. It is important that the bread is one day old, it will have lost some of its water content and will absorb more liquid during the mixing process.

Olive oil: also known as liquid gold, us Spaniards don’t understand cooking without it. The flavour of the extra virgin olive oil is stronger and we use it for raw or uncooked foods, leaving the refined versions for cooking. There are different varieties of olives, picual has a stronger taste, while alberquina is milder.

Garlic: Because this is a raw soup, just one clove of garlic will do. Remove the germ to rest bitterness. And if the variety of garlic you are using is too pungent, just add less quantity. In Spain, purple garlic is preferred because it is milder.

Vinegar: it is an optional ingredient but most people add it to their dishes. Use a wine vinegar, which type you use depends on whether you want to add another flavour profile to the dish or if you prefer the tomato taste to shine.

Salmorejo was prepared in the old ways using a pestle and mortar, and even though there will still be some people who will still go the traditional way, nowadays most of us use some sort of food mixer.

Pestle and mortar: some people pour the vinegar over the miga (white part of the bread) to make the crushing easier. Then, place bread in mortar with garlic and a dash of olive oil and start crushing. When the mixture looks like a paste then add the tomatoes cut in cubes and keep on crushing. Finally add salt to taste.

Food processor: prepare the ingredients by peeling and cutting into smaller pieces. Start with the tomatoes in the food processor, then add the bread crumbs and let it absorb the tomato juice for a few minutes. Lastly, add all the remaining ingredients and blend until you get a smooth creamy soup.

Some tricks people swear by to make a tastier salmorejo go from prepping all the ingredients a day ahead and put them in a bowl overnight to removing the miga from the bread using your hand instead of a knife.

There are two ways to add the olive oil: you can either put it in the bowl with the rest of the ingredients, or you can slowly pour it in the container while you blend the ingredients. This later one will create a finer texture.

Everybody prepares salmorejo differently, and in most families this is a recipe that people make “by eye”, meaning they just look at what seems an appropriate amount, then taste and correct flavours. Below, I leave you a link that takes you to the Spanish Salmorejo Association. Yes, it is real. You will find a recipe that they came up with after a study conducted in Córdoba to find out what was the preferred method to make salmorejo. The recipes are written in several languages and it comes with a nutritional table.

There are a ton of different varieties of this dish all around Andalusia. Which one came first? Who knows, but undoubtedly the better known version is the “salmorejo cordobés”. Now, let me introduce you to two other versions: arranque roteño, from my home town Rota, and porra antequerana, from a small town in Málaga called Antequera.

You can see that the main difference is one ingredient, the green pepper. Other differences between the three dishes are the thickness and the creaminess, which can be achieved with the amount of bread that you add and the mixing of the olive oil to create an emulsion.

A NOTE ON ARRANQUE: if you are using the traditional way to make it, start crushing peppers cut into pieces with garlic and pinch of salt. When you have a paste add tomatoes and mix well. Finally, add a bit of bread and a bit of olive oil at a time and mix well. It is typical to use pieces of pepper as “edible spoons”.

For an awesome authentic arranque recipe, like the photo below, please follow the link here. This recipe is courtesy of the cooking blog www.divinacocina.hola.com. The blog is in Spanish but contains a lot of simple and delicious recipes that you browser should be able to translate.

A NOTE ON THE PORRA: it is said that the real porra antequerana will hold a spoon vertically without falling. That’s how thick it is, and that is to the fact that it has more bread in it, around half the amount of tomatoes.

Nowadays, I feel like the boundaries of which dish is which gets lost once you use a blender.

HOW TO EAT SALMOREJO

¡Now you have your salmorejo or a close relative! How do you eat it? First, put it in the fridge because the process of elaboration has made your soup warmish and we want it very, very cold. While it cools off, prepare some garnish. In Spain, it is typical to add boiled egg, serrano ham and sometimes tuna cut into small cubes. You put whatever you want, I am not a purist and won’t get mad.

You can eat it as a soup, as a dip, on toast, as a sauce accompaining other foods… you name it. This is the most versatile summer dish in Spain. My mum used to make arranque every second day during summer because we ate it all day long.

If you are like me and broke up with bread, be original and swap those mean carbs for other ingredients that will add thickness to the mixture. A few options are: avocado, apple, cooked cauliflower (it does not taste like cauliflower until the second day) or almonds. For a change of flavours you can also add strawberries.

It is worth mentioning that I did a blind tasting of arranque with two friends who had never tried it before. Their favourite was the original one followed by the avocado variety, although they were later put off by the ugly colour.

That’s all friends. Let me know if you have ever tried salmorejo or any of its varieties and what you thought of it.